How does a CPU heat sink work?

1. A heat source generates heat. This source can be any system that generates heat and needs to remove said heat to function correctly, such as:

2. Heat is directed away from the source. Heat pipes can also help in this process, but we will cover these components separately. In applications with direct contact with the heat sink, heat enters and moves away from the heat source by natural conduction. The heat sink material's thermal conductivity directly affects this process. This is why highly thermally conductive materials such as copper and aluminum are most commonly used in the construction of heat sinks.

4. Heat moves away from the radiator. This process depends on the temperature gradient of the radiator and its working fluid - most often air or a non-conductive fluid. The working fluid crosses the surface of the hot radiator and uses heat diffusion and convection to carry heat away from the surface and into the surroundings. This stage again relies on the temperature gradient to remove heat from the radiator. Therefore, if the ambient temperature is not lower than the heat sink, convection and subsequent heat dissipation will not occur. This step is also where the total surface area of the heat sink becomes most favorable. The large surface area provides an increased area for heat diffusion and convection to occur. 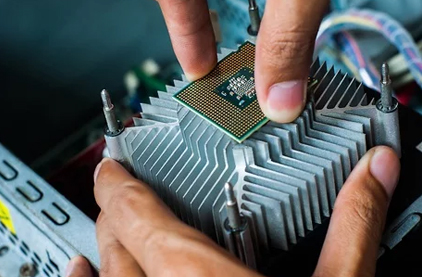 Heat sinks are most commonly used in active, passive, or hybrid configurations.

- Active radiators use forced air to increase fluid flow through the hot zone. Forced air is usually generated by the movement of a fan, blower, or even an entire object - such as a motorcycle engine being cooled by air along a heat sink designed into the engine. An example of a fan generating forced air through a heat sink is the fan in your personal computer that turns on after your computer gets hot. The fan forces air through the radiator, which allows more unheated air to cross the radiator surface, thus increasing the total thermal gradient of the radiator system and allowing more heat to leave the entire system.

- Hybrid radiators combine some aspects of passive and active radiators. These configurations are less common and typically rely on the control system to cool the system based on temperature requirements. When the system operates at a lower temperature, the forced air source is inactive and only passively cools the system. Once the source reaches a higher temperature, the active cooling mechanism kicks in to increase the cooling capacity of the radiator system.

Another way to dissipate heat is to use a fan, but fans are a common point of computer hardware failure, especially in harsh environments. When a computer is hit, dropped, or subjected to mechanical vibration, the fan may become clogged or even break with dust or debris.

The heat sink is passive, which means there are no moving parts. Fan cooling is active, so there are moving parts and ventilation holes. Another benefit of radiator cooling is that it eliminates the need for vents, and the computer can be completely sealed and waterproof.

As we mentioned, heat sinks are most commonly found in a computer's CPU. For example, the Jetson Nano has a large heatsink to help cool the onboard quad-core ARM A57 CPU and 128-core NVIDIA Maxwell GPU, which generate a lot of heat and require excellent cooling to avoid thermal throttling. Of course, there are many other big brands of heat sinks that have excellent cooling. Still, we know that big brands generally have their OEMs, so if you want a high-quality CPU heat sink at an affordable price, CPU heat sink manufacturers are your best bet, such as Coolsolte.